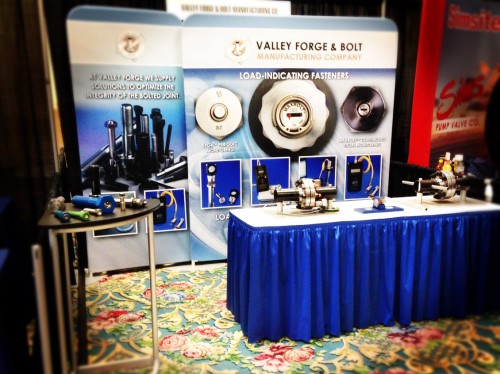 Jay Palmer and Jeff Blankenship were in San Diego at the Fleet Maintenance & Modernization Symposium 2015 presented by the American Society Naval Engineers.

They had numerous demo flanges to give demonstrations on the SPC4™ Wireless Model that is now in testing.  In addition they took a beautiful Maxbolt™ Knowledge that was recently created with a high visibility indicator, capable of being seen at great distances.  As per usual, they also had samples of the original Maxbolt™, SPC4™, Ball Lock Washers and so much more!!

This annual event is targeted at US Navy fleet personnel and suppliers. Attended by Port Engineers, Admirals, and Tech Warrant Officers alike, the theme of the event and focus of vendors is on improving reliability and reducing cost and repair. From General Dynamics to Superbolt, and complete ships to pumps, adhesives, and engineering services, all topics relate to reduced cost and more reliability.

We were very well received by everyone who witnessed our demo and products. Most had never seen such technology and embraced it with positive feedback.