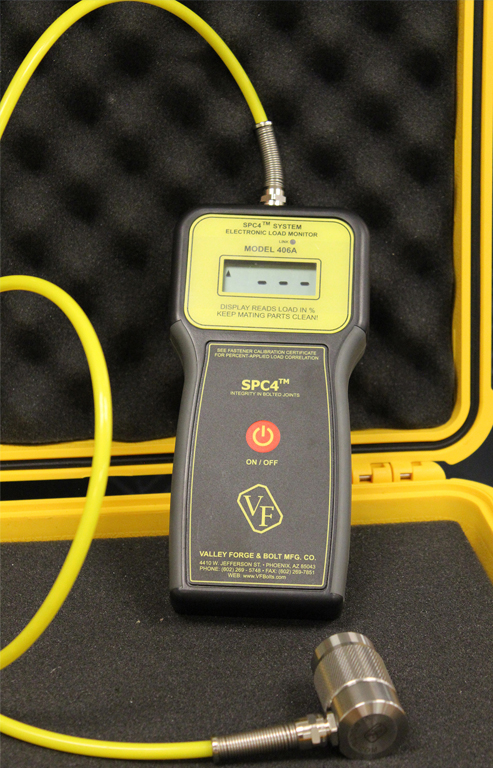 The SPC4™ system encompasses fasteners equipped with Valley Forge load-indicating technology along with a wide variety of meters to fit a range of applications and environmental conditions. The meters, including analog, digital, or Wi-Fi versions, measure tension directly from within the fastener to +/- 5% accuracy. The 406A meter joins this complete offering.

In total, the SPC4™ system provides the most accurate information possible about the actual load within critical joints. In the field, this information is used to make both installation and maintenance faster and more accurate, create more effective maintenance schedules, and give crucial, early insight into fastener and equipment behavior that might lead to premature failure, allowing it to be corrected before problems arise. The net gain is increased productivity, performance, and safety combined with savings of time and money.

The 406A meter, which is already in use in mines in South America, boasts a rugged design with a shock-resistant casing that is IP54-rated for protection against dust and particles. Its internals are specifically engineered to deliver high performance in hot and humid conditions like those often found in mining and oil and gas applications. Bluetooth compatibility provides scalability for remote data monitoring and data logging capability.

“SPC4™ technology has been embraced by customers throughout the mining and oil and gas industries,” said James Brooks, Valley Forge & Bolt’s director of engineering and new business development. “With the 406A, our aim was to create a meter with the extra durability these environments need while still maintaining the high degree of accuracy people expect from Valley Forge.”

The ergonomic handheld design was built for ease of use in the field; its one-touch operation is easy to engage without removing PPE gloves, and a large digital display allows for easy reading.

Brooks says Valley Forge has accomplished its goal with the 406A, and he’s eager to see what other industries will embrace it. “This meter easily stands up to extreme environmental conditions. Its proving ground was in mining and oil and gas, and we expect it will perform impressively in other demanding environments,” said Brooks.