CURE FOR THE DAILY GRIND?

A large polymetallic underground mine in South Australia is using technology to improve safety and productivity. Because the mine is one of the largest global suppliers of the metals being mined, every aspect of the operation was put under the microscope—from the vehicles moving material to the kinds of bolts used in its autogenous grinding mills. Valley Forge & Bolt, a Phoenix-based maker of custom fasteners, used its unique Load Indicating Technology to assist the mine in this focus on efficiency. 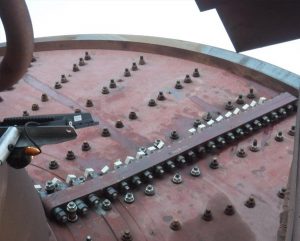 Valley Forge’s SPC4™ bolts have built-in load indicators that measure clamp load in real time and relay the information to a variety of meter options. When accompanying wireless probes are linked to the SPC4 bolts, mine engineers are able to incorporate the captured data into their SCADA system and track changes to clamp load as it happens, in situ.

“There was a feeling that this particular mill was nearing the end of its service life,” said Brandon Proebster, sales engineer for Valley Forge & Bolt. “Mine engineers wanted the ability to closely monitor its performance to strike that balance between getting maximum use out of the equipment, but not pushing it beyond its service life.”

Valley Forge’s bolts with Load Indicating Technology, such as SPC4, are accurate to within +/-5%, measuring full bolt stress from zero to 100% rather than a single load preset like some other fasteners that purport to indicate load.

Proebster and Valley Forge’s regional director, Barry Thomas, traveled to the mine to get a better understanding of conditions on the ground and what mine engineers hoped to accomplish. The mills begin their process with material the size of footballs that is then processed down to powder. It is in this violent transformation that vibration within the mill takes its toll on bolted joints.

To reduce expensive manual monitoring of the joints and to prolong the life of the equipment, Valley Forge custom manufactured a total of 376 SPC4 bolts, ranging in size from 2.5 to 3.5 inches in diameter and from 10 to 16 inches in length. The installation also included electronic and mechanical load meters. A set of SPC4-702 wireless sensors was then added, allowing the SPC4 bolts to deliver real-time data to the site’s mill monitoring dashboard.

“Engineers selected strategic locations for the SPC4 fasteners within the mill, focusing attention on areas deemed to be most critical,” said Proebster. “Using SPC4, we replaced the radial flange and trunnion bolts at both the feed and discharge ends.”

Due to the severe service conditions present in large grinding mill applications, the fasteners used to assemble the mill shell are considered “critical fasteners” and require regular testing and maintenance. Traditionally, ultrasonic elongation testing is used to ensure that proper clamp load is being maintained. However, this method requires a scheduled outage and trained personnel to accurately interpret the results. Ultrasonic measurement also fails to provide real-time bolt load information.

With the SPC4’s ability to tie into the mine’s SCADA system, engineers got their first-ever real-time look at how the mill’s performance affects clamp load. Doing so without requiring a planned outage saved precious time and money, a benefit that continues. Plus, the information gleaned informs maintenance schedules and provides early alerts to potential problems. The data also provides insight into the general health of equipment.

In the ensuing months, mine engineers transitioned other grinding mill shell fasteners to SPC4. “Alerting operators to the smallest loss of tension in real time allows them to immediately investigate, diagnose, and prevent equipment failure,” said Proebster. “The information provided by SPC4 bolts is extremely valuable because time is money.”

More so, according to mine personnel, the use of Valley Forge & Bolt’s wireless data-relaying load indicating fasteners was a huge gain for mine safety and asset integrity.