What if you bought a mine and 6,000 bolts were improperly tensioned?

Buying a mine with an unknown maintenance history and a multitude of bolts showing signs of improper tension is a worst-case scenario. Yet even in this situation, load indicating fasteners can still save big money and thousands of man hours. A mine operator in Latin America made this discovery when it purchased such a mine. Inexplicably, the previous owner had neglected its mills, and nearly every bolt was not tensioned to the correct design load. However, as luck would have it, the mills were entirely outfitted with SPC4 Load Indicating Fasteners from Valley Forge & Bolt. 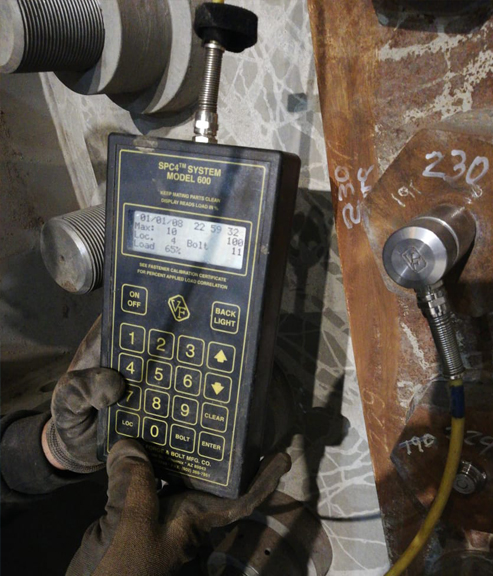 The first hint of trouble? Bolts were loose in their joints, at 0% tension. The mine was running two processing lines, each with one SAG mill and two ball mills, for a total of six mills. With each mill containing approximately 1,000 bolts, there were 6,000 bolts that needed to be checked. It was a monumental task.

The mine’s new owner reached out to Protorq, Latin America’s premier distributor and installer of Valley Forge SPC4 and other fastener products. In the face of a seemingly impossible situation, the one saving grace was the presence of the SPC4 Load Indicating Fasteners, which opened up a range of time- and money-saving options that simply would not have been possible with any other type of bolt.

SPC4 fasteners contain proprietary technology that measures tension as a percentage of minimum yield from directly inside the bolt. The information is relayed from a datum disc on one end of the bolt to a variety of Valley Forge meters and displayed in an easy-to-read digital or mechanical format.

“With SPC4, it couldn’t be any easier to check fastener tension,” said Bret Halley, chief operating officer of Valley Forge. “The previous mine owners simply weren’t using the technology and capabilities that were right in front of them.”

Ultrasonic testing not an option

What if the same scenario had existed, but with standard bolts rather than SPC4? Some might believe that ultrasonic testing would have been an equally easy solution. The fault in that thinking is this: There were no baseline measurements recorded by the previous owner after the bolts’ initial installation. As a result, Protorq’s crews would have needed to first remove and then re-install or replace all 6,000 bolts to recreate this baseline measurement. Conversely, the SPC4 system allowed them to replace only the 100 bolts that were over-tensioned, saving hundreds of maintenance hours.

Protorq’s 30-man crew spent 35 days, spread over several months, to completely rehab the six mills. Protorq’s general manager, Gonzalo Diaz, estimates that without SPC4 it would have taken three times as long. “Without SPC4 technology, this easily would have been a 100-day undertaking,” said Diaz. Multiply each additional day by 30 crew members, and it’s easy to see how the man hours saved would stack up quickly. 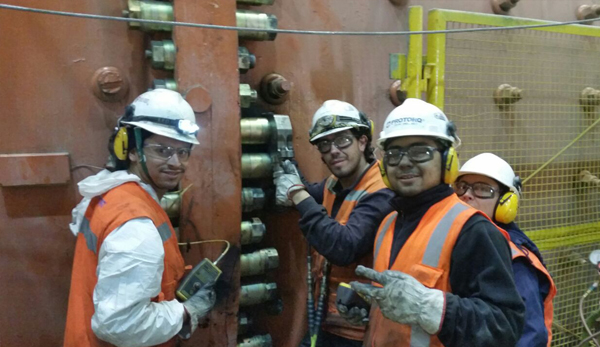 SPC4 also comes with other benefits for mines and their mills. The Model 600A digital meter, which was left with the mine on completion of the rehab project, features data-logging capabilities. Tension data collected from the SPC4 fasteners can be uploaded to mine computers to develop a clear picture of vibration hotspots. The meter also creates an automatic record of tension data at install or re-tensioning, so the mine will never again be without this information.

Halley points out another advantage. “Properly tensioned bolts prevent slurry ingress into a mill’s critical joints. Once slurry gets in, it becomes a permanent issue over the life of the mill. It can lead to chronic bolt failure.” He describes the exponential growth that starts with a small cluster of just a few bolts that fail, which quickly becomes 10 bolts, then 20, and so on.

This is significant, since mills are in service for an average of 30 years. Using SPC4 Load Indicating Fasteners from the beginning, and using them properly, can reduce this risk, which saves incalculable time and money over the life cycle of the mill. “Not only that, it protects a multimillion-dollar investment in that mill,” Halley said.

Diaz, Protorq’s general manager, says that mine owners not properly taking care of equipment is, unfortunately, a larger problem than one might imagine. “The results are often catastrophic,” said Diaz. “Luckily in this case, we had SPC4. That made all the difference in allowing us to tackle the problems in a timely manner and bring the mills back to health.”