A mining operation is only as good as its ball mills, which a precious metals mine in British Columbia, Canada, discovered the hard way. A simple disruption in the mating of flanges in the ball mill was causing tens of thousands of dollars in losses on a weekly basis. It took a new kind of fastener, and a manufacturer with an innate understanding of bolting technology, to remedy the problem.

With the flanges not mating properly, bolt breakages in the mill were occurring on nearly a daily basis. Bolt changeouts typically lasted four hours, at a cost of $9,000 per hour in lost production. Multiple outages costing roughly $36,000 each occurred every week, adding up quickly. Not to mention they’d been going on for two years. 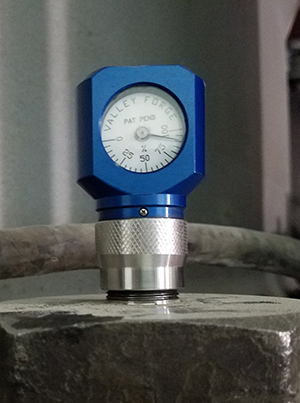 On top of the high price of bolt replacement, the mine was also losing money in the form of restart costs. The power drain associated with restarting the motors on four 12,000-horsepower mills sent hydro costs skyrocketing.

Mine maintenance engineers tried a number of potential fixes, but nothing worked. They contacted several different fastener companies, with no resolution–until they reached out to Valley Forge & Bolt, maker of fasteners with Load Indicating Technology. Valley Forge engineers took careful measurements of the troublesome mills and their flanges and extensively studied the various strains to which the mills were being subjected.

After reviewing the results, Valley Forge engineers determined the mill’s maintenance staff needed a method of monitoring bolt tension so they would have some warning of emerging issues. Engineers also wanted to extend the grip length of bolts used in the ball mills.

Valley Forge engineers specified the company’s exclusive SPC4™ Bolts with Load Indicating Technology for the application. SPC4 bolts have built-in load indicators that measure bolt load from directly inside the bolted joint. A datum disc on the end of each bolt translates this information and relays it to digital meters, where it is displayed as a percentage of load. The result is an easily readable numerical display that measures actual tension within the fastener, accurate to within +/-5%.

Now, rather than relying on far less accurate torque-to-tension conversion formulas, mine maintenance staff can monitor critical joints and be aware of tension loss well before catastrophic failure.

In addition to including Load Indicating Technology, Valley Forge specified extra-long bolts for the mine. The company supplied 17-inch bolts, rather than 13-inch, and dual 2-inch sleeves to be used with each bolt. The rationale behind the recommendation is that, for given service loads in the joints, bolts with the longer grip lengths will be more forgiving to flange separation caused by mill charge movement. The longer bolts increased the grip length of each joint by nearly 40%, from 10.5 inches to 14.5 inches.

According to the mill’s maintenance manager, “Valley Forge & Bolt instructed us in the fine art of bolting technology. I didn’t think I could ever learn this much about bolts.” By the mine management’s own estimation, changing to the Valley Forge SPC4 Bolts with Load Indicating Technology saved them $20 million.