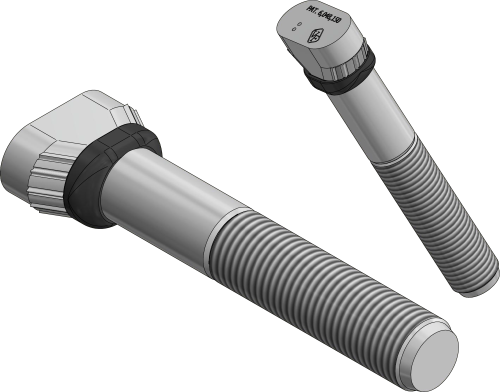 Valley Forge has recently developed a liner bolt innovation to improve the reliability of mill liners and liner bolts in ore grinding mill applications. Recently, concern has been raised about liner breakages triggered by stress concentrations found at the base of the liner pocket where contact is typically made with the bolt head. Liner bolt customers have also reported problems of ‘racing’ due to leakage of slurry between liner pocket and bolt head. This phenomenon can cause wear and premature failure to bolts and the mill shell alike.

The Sealing Mill™ Ridgeback® liner bolt has been designed and evaluated to prevent problems related to load distribution, as well as slurry leakage, which can lead to ‘racing’. The Sealing Mill™ Ridgeback® produces effective sealing of the bolt to liner pocket throughout the full range of bolt capacity, including very low loading conditions. Additionally, the polymer bushing is designed to transfer a pre-determined amount of bolt load while remaining load is distributed higher up on the head.

The polymer bushing was selected with a durometer rating based on results from testing. In order to achieve the best balance of load distribution and part life, factors such as memory retention, compliance and load bearing capacity were all considered.